Vera Jimenez is KTLA’a (CW affiliated television station located in Los Angeles, California) meteorologist and traffic reporter for the KTLA 5 News at 6 o’clock and KTLA 5 News at 10 pm and 11 pm. She is very active on social media and she regularly posts about her upload on other social media, she goes live, etc. She is one of the top ranked reporters on KTLA 5 News and she owns a small business called “Hermosa Beach Seafood Restaurant”. It is not clear, but it looks like she began that business with her husband, but more about that later.

Vera Jimenez was born on December 5th, 1965 in Mexico City, Mexico. At the time of writing this article, Vera Jimenez is 51 years old.

Vera Jimenez was born in Mexico but her family moved to the United States of America when she was only 3. They moved to Southern California and most of her family still lives in Garden Grove.

As we have already stated earlier, Vera is present on most of the popular social networks but she doesn’t reveal everything in her posts and short bios. For example, she never mentions her family but she does say that she is a “wife, daughter, sister and a friend” in her short bio on Instagram.

Her romantic life is also under the veil of secrets but we’ve been able to find a couple of hints. 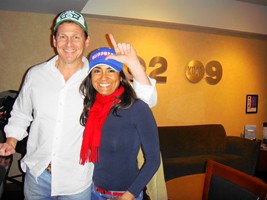 The man next to Vera is Brian Herlihy. He has been mentioned in a number of her posts by name. The rumor has it that they got engaged a long time ago quietly, and they haven’t told the media a single thing about it. Why would they? It has also been said that she even got married a few years ago and she also managed to keep that one a secret.

She mentioned her husband (not as a husband, just by name) in a number of her posts on Flickr and Facebook.

Thank goodness for Brian Herlihy, who talked me into taking a nap! Feeling great! Hence H2O instead of java! Watch out Friday 'cause here I come

Brian Herlihy flies under the radar. Media hasn’t been able to find out much about him, but one of the popular Bio websites “marriedwiki” managed to find out that Brian works at Tito’s Handmade Vodka. That is one of the largest selling vodka manufacturers, with its facilities located in Austin, Texas. He had also worked as a marketing manager at Miller Brewing Company.

Brian grew up in Wellesley, Massachusetts and he now lives in California with his wife Vera.

She has always wanted to be in a broadcasting business so she started working very early at Santa Ana Community College. Later on, she interned at KIK – FM in Orange County and started working for Shadow Broadcasting as a producer. After that, she got in the KFWB-AM as a fill in for Traffic overnights. But that wasn’t enough for her. She wanted the best experience she could get, so she kept looking until she got a job at KNX-AM as an airborne traffic reporter. Although she has always wanted to work as a reporter in general, the one thing on her mind was television.

Vera Jimenez eventually got hired by the KABC-TV and afterward by KCBS-TV. While working at KCBS-TV she saw an opportunity but she had to upgrade her knowledge in meteorology in order to use the opportunity. That is why Vera went back to school to study meteorology at Mississippi State and she got her certificate in August of 2009.

She is now working as a weather reporter for KTLA-TV and she owns a small business with her husband, called Hermosa Beach Fish Shop. They pride themselves with the freshest fish you can find, over 2,000 different meal combinations and a family friendly atmosphere.

Vera is trying to be an expert of whatever she starts doing. That is how she advanced far enough to be one of the best meteorologists on TV and she owns one of the best fish restaurants in Los Angeles. Her Net Worth is constantly changing, but right now it unofficially stands somewhere around $350,000.

She is of Mexican nationality, she is white, and she is a citizen of the United States of America.

Vera has been off the radar of every single new outlet only because she wanted to be so. She has never wanted to mix public life and her private life. That is why she only posts thing of professional nature on her public accounts and maybe she has a private one we don’t know about.

She is not a lesbian and she is married to Brian Herlihy.

Vera weighs somewhere around 61kg but her height is not known. Her measurements are 35-25-35.

Miodrag or Mike as everybody calls him has established himself as a great writer and author. The quality of his content is what makes him unique and so great for this field. He started writing about sports for a local newspaper but quickly transitioned to some tabloids and worked for various other sites where he has done more of the same.